The Metrotown demovictions are rapidly becoming the most hot button issue in Burnaby, and we want to know what you think!  Please fill out this quick four-question survey to let us know how you feel about the issue.  Or keep reading if you want to know more... 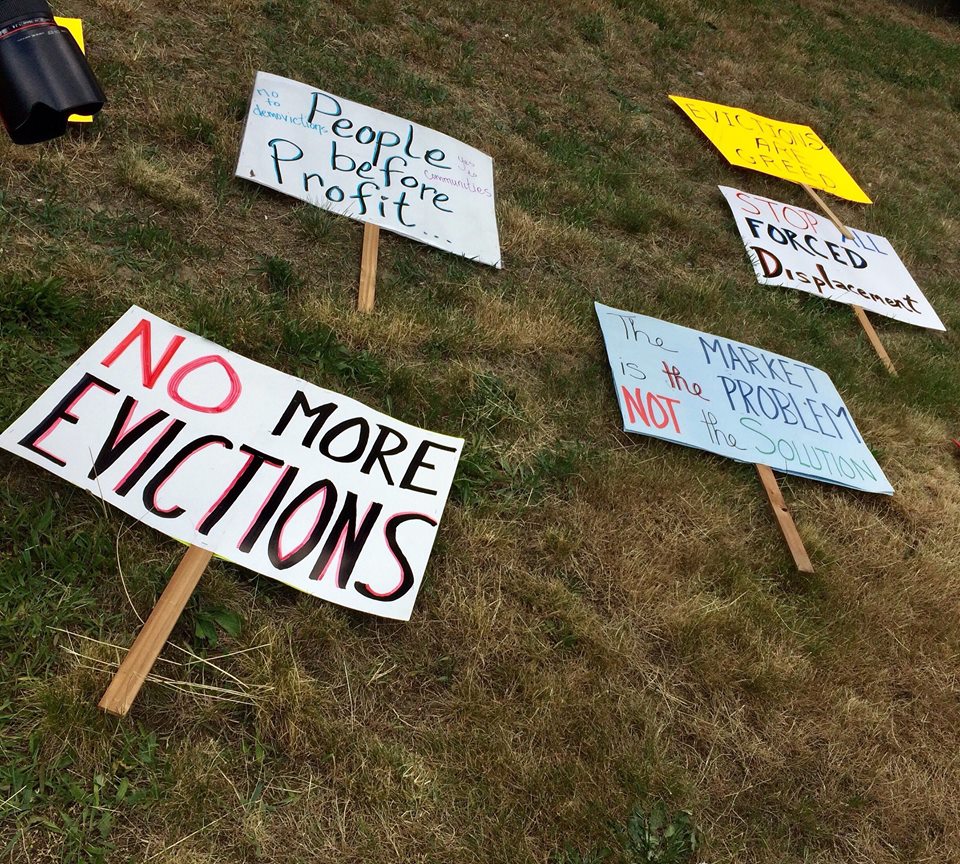 Due to the approval of the Metrotown development plan which allows for the neighbourhood be be rezoned, developers are rapidly buying up property in order to demolish existing affordable rental buildings and replace them with expensive high rise condominium towers.  To date, over 2,000 people are estimated to have been displaced, and it’s estimated that by the time the projects are complete, that number will have reached over 6,000.

Burnaby has extremely low vacancy rates in the midst of a serious housing crisis, and low-income families, including a vulnerable immigrant population, are being evicted from their affordable homes and left vulnerable to homelessness.  Many families thus far have been facing a 50% increase in rental fees and/or have been forced to move away from their communities to outlier cities such as Surrey or Maple ridge, even if their jobs, family or friends live in Burnaby. Many of these families have lived in the neighborhood for more than 10 years.

As always, there is more than one side to this story.  Proponents argue that providing affordable housing is a provincial responsibility, and that densification around skytrain stations creates more housing options and is good for climate change.  But many feel that the city is ignoring their responsibility to its residents, where demo-victed families are not being taken care of in the interim of being evicted from their homes.

Here at Force of Nature, we recognize that creating “compact communities” around transit corridors is an important pillar of our transition away from fossil fuels, but feel strongly that good densification and development plans are rooted in the needs of the existing communities and ensure that our new vision for a post-carbon future does not leave the more marginalized members of our society behind.

With that in mind, we’ve decided to join the coalition with ACORN BC and unions such as CUPE local 23, BCGEU, TSSU that are calling on the city for an immediate moratorium to halt demovictions in Burnaby.  The Green civic party has also committed to a moratorium if elected in the municipal election. None of these groups are anti-development; we are simply calling to put a stop to the ongoing displacement until a solution can be found.

What are some of the potential solutions to this problem? Some folks are calling for modular homes that can support evicted families at the same rental price until new developments are completed. Others are advocating to pair this with the requirement for new developments to have affordable units for those families to return to, at the same or similar rental pricing as when evicted. Thanks to the ongoing political pressure, the BurnabyNow has just reported  that the BCA now “hopes to strike deals that would guarantee new homes at similar rental rates for individuals displaced in have so-called ‘demovictions,” though if and when this will be implemented remains to be seen.

TELL US WHAT YOU THINK!

This is a complex and controversial issue and we want to hear what you think!  Do you agree with Force of Nature’s decision to join the anti-demoviction coalition in Burnaby? Fill out this survey or drop us a line and tell us what you think.

If you would like to learn more or support the groups organizing to stop demovictions, there is a victory rally next week on Tuesday, July 24th 6:30pm-8:30pm at Burnaby City Hall (4949 Canada Way). Find their facebook event here.

You can also support by adding your voice to the online submission to city council here.

Meanwhile, our team here in Burnaby is continuing to strategize our plan to help transition Burnaby off fossil fuels. We’re having meetings, canvassing and meeting with local community leaders. Will you join us?  Our next Burnaby team meeting is Monday, July 30th from 6:30pm - 8:30pm at the Bob Prittie Metrotown Library. Click here to sign up!

Together we can organize and help make Burnaby a leader in the global race to a low-carbon future!