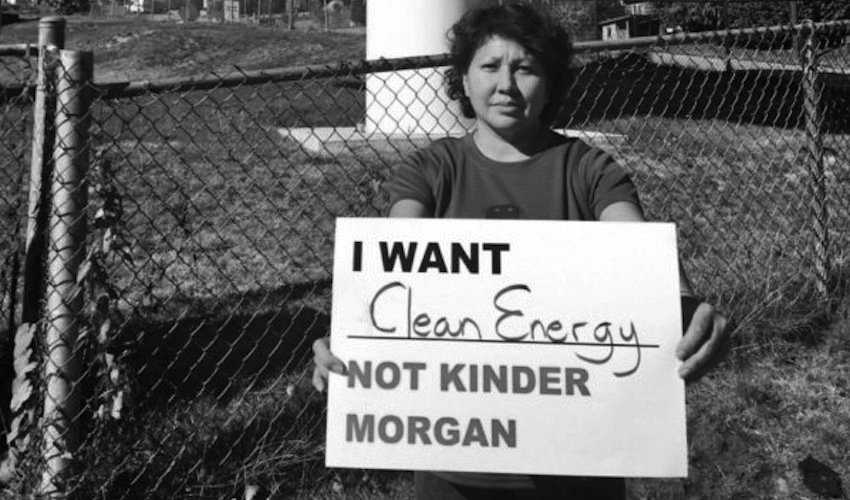 Dozens of First Nations communities, and thousands of Indigenous people will directly impacted by the construction of the Kinder Morgan pipeline, most of whom are already affected by the existing pipeline crossing their territory, or the toxic tar sands waste water that's perennially leaching into their communities.  There is a diverse spectrum of opinions about Kinder Morgan among, and within these communities; some support the project, while others have signed "impact benefit agreements," with the corporation, believing the expansion inevitable, but not necessarily signalling their consent.  A plurality of these nations do not feel that they have been adequately consulted.

There is also a broad, fierce and fast-growing movement of outright opposition to the project; 16 nations along the right of way have spoken out against this project, and a total of 59 nations across the country have signed a treaty against tar sands expansion or pipelines of any kind.  Some Nations support the project and others, like the Tsleil Waututh, have committed unconditionally to fighting Kinder Morgan through the federal courts, at tremendous financial cost to their nation.

The glaring lack of consent for this pipeline is extremely problematic, especially in light of the federal government's numerous pre- and post-election commitments to start taking First Nation's land and title rights seriously.  In December of 2015, Trudeau stated that "it is time for a renewed, nation-to-nation relationship with First Nations peoples, one that understands that the constitutionally guaranteed rights of First Nations in Canada are not an inconvenience but rather a sacred obligation."  As part of a 5 point plan, Trudeau pledged to adopt all 94 recommendations in the Truth and Reconciliation Commission Calls to Action including article 43: we call upon federal, provincial, territorial, and municipal governments to fully adopt and implement the United Nations Declaration on the Rights of Indigenous Peoples as the framework for reconciliation.

In May, the ministers of Indigenous and Northern Affairs and Justice pledged to “fully adopt and work to implement” the terms of the United Nations Declaration on the Rights of Indigenous Peoples including ARTICLE 32: 3.  States shall consult and cooperate in good faith with the Indigenous peoples concerned, through their own representative institutions, in order to obtain their free and informed consent prior to the approval of any project affecting their lands or territories, or other resources, particularly in connection with the development, utilization, or exploitation of mineral, water or other resources.

Despite their public-facing dramatics, our current government appears to be having more trouble "walking the walk" when it comes to Kinder Morgan.  In place of the groundbreaking steps the promised us they'd take in the service of renewing our relationship with these Nations, they appear instead, simply to be defaulting to the insulting and inadequate low bar of "consultation" required by our current constitution in order to push this pipeline through.