Great Green Jobs Throughout the Region, Province and Country

Public Transit, Renewable Energy, Green Buildings and Technology have the potential to create thousands of great new green jobs across our region, province and country, which is why workers from coast to coast have been calling on all levels of government to create and implement viable plans for local, long-term jobs that Canadians can be proud of.

According to "Transit means business: The Economic case for Public Transit in Canada, "The job-creation powers of transit investment have been confirmed by the British Columbia Treasury Board, which found that spending on transit creates jobs more cost-effectively than spending on other modes of transportation. It estimated that a $1 million transit expenditure creates an average of 21.4 new jobs, compared to 7.5 jobs for the same automotive expense, or just 4.5 jobs in the petroleum industry."

Here in the Lower Mainland, the mayor's transit plan alone would have created "26,322 person years of new direct employment... and a $4.48 billion boost in Metro Vancouver’s GDP." (Green Jobs BC)

Investing in energy efficient buildings has the potential to create hundreds of thousands new jobs, especially in urban centres.  The Canadian Labour Congress's One Million Green Jobs plan, estimates that close to half a million jobs could be created by investing in the green building sector over the next ten years.

Green Jobs BC estimates that there are already 23,200 jobs in British Columbia in this sector, and, as this Green Buildings jobs map from the Pembina institute illustrates, that most of them are right here in the Lower Mainland.

According to the Stanford Solutions project, Canada could transition to 100% renewable energy and create  460,013 operations jobs and 290,716 construction jobs in the process. (The project calculates each job as to constitute a generous forty years of full-time employment.) Check out this Pembina clean energy jobs map to see the renewable energy jobs that already exist in British Columbia.  BC has potential to develop solar, wind and geothermal energy industries, but we need better provincial policies put in place to help us get there.

With the right investments, we can grow our clean tech sector, which already employs more people than the tar sands Canada-wide. Check out this great report from Cred BC report illustrates that "BC’s tech sector is growing at double the rate of the overall provincial economy," and calls for "more strategic investments... to help BC achieve its potential." 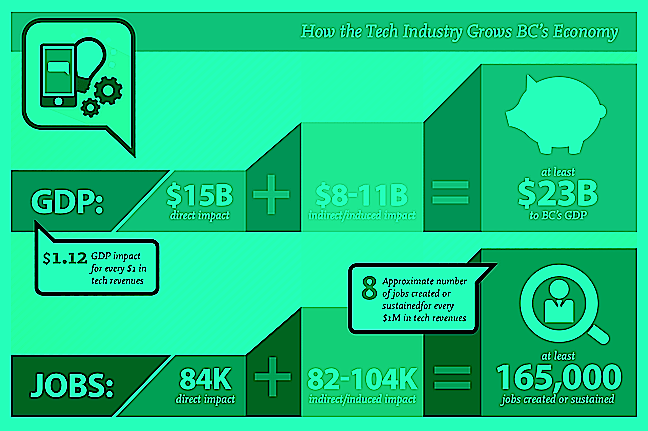