Kinder Morgan in our communities 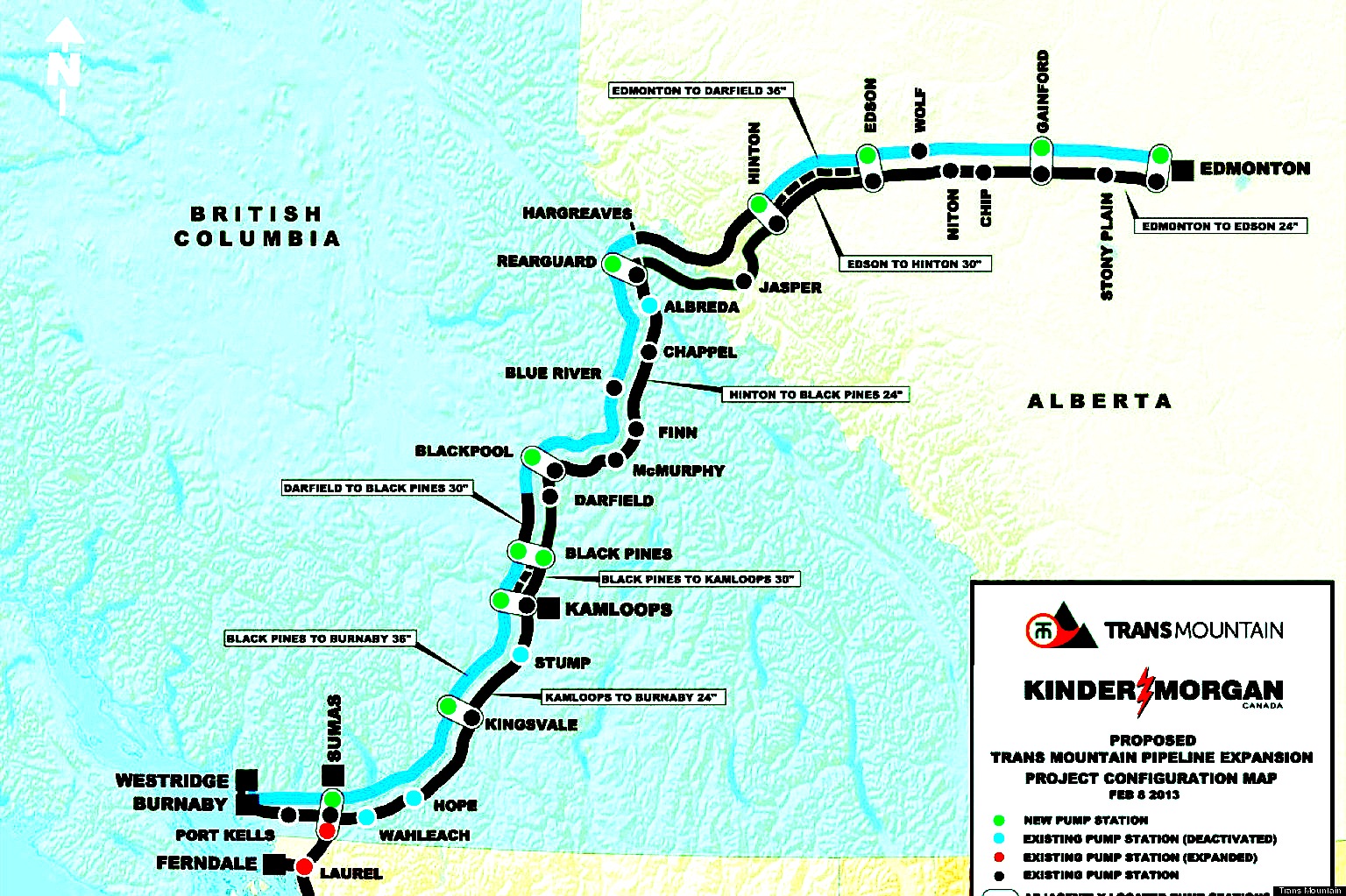 In 1953 the original Trans Mountain pipeline was built to bring conventional light crude oil from Alberta to the west coast for our local use. Before its construction, Vancouver area refineries were importing their supply of crude by tanker.

As the years went by the Trans Mountain was transformed into a batch pipeline that carried refined fuels and natural gas as well as crude oil.  Eventually it became owned by Terasen Gas which was bought out in 2005 by Kinder Morgan, who kept the pipeline and flipped the rest of the business to Fortis.

So who is Kinder Morgan?

Kinder Morgan started off as Enron Liquid Pipelines LLP, a division of the infamous energy giant that was brought down by fraud and accounting irregularities. In fact Richard Kinder served as President and COO of Enron from 1990 until he left to form Kinder Morgan in 1996. The Wall Street Journal once called Richard Kinder the "luckiest ex-Enron employee."

What is the new  Kinder Morgan pipeline?

In April of 2013, Kinder Morgan announced that they would be applying to build a new pipeline from their Edmonton terminal to the Westridge Marine Terminal in North Burnaby. This new pipeline is triple the size of the existing one. When combined with the existing pipeline, this would allow Kinder Morgan to move 890,000 barrels of oil a day to our coast.

Unlike the original Trans Mountain pipeline, that was built to reduce BC's reliance on foreign oil, this new project is exclusively intended for exporting oil by tanker. The new pipeline is also moving a new kind of oil, a form of tar sands crude known as dilbit or diluted bitumen.

This mixture of unrefined tar sands crude and condensate creates many new challenges in the case of an oil spill or accident. Condensate is incredibly toxic cocktail of chemicals that contains benzine and other volatile hydrocarbons. These evaporate quickly, releasing a toxic cloud that could threaten the health of local residents, and delay emergency response during an oil spill.

Once the diluent has evaporated, the remaining tar sands crude may sink in marine environments. This poses a huge challenge to oil spill clean up because we don't have any technology to clean up oil once it has sunk below the surface. Transport Canada reports say that little as 5% of this oil could be cleaned up by an emergency spill response.

What about the economy?

Pipeline companies like to suggest that new oil infrastructure will bring jobs and economic growth to the communities they are built in. The truth is that these projects create few long-term jobs and the profits leave the community.

In the case of the Kinder Morgan pipeline even by the company's own estimates only 50 long term jobs will be created by the project. When you put that in context with industries that would be harmed by an oil spill, like tourism which employees 93,578 or fisheries which creates over 9,000 jobs, it is clear that the benefits are out weighed by the risks.

What about profits? Well Kinder Morgan Canada is a wholly owned subsidiary of Kinder Morgan LLP based in Houston Texas which means that the profits will be shipped south of the border. The vast majority of the oil companies that have signed contracts to ship oil on the pipeline are also foreign owned, meaning any profits to be made from the oil leave the country with the oil.

What about taxes? Kinder Morgan will pay some taxes in BC mostly in the form of local property tax but a recent study by five local municipalities shows that the existing pipeline adds more in new costs that they could ever hope to recoup in taxes. 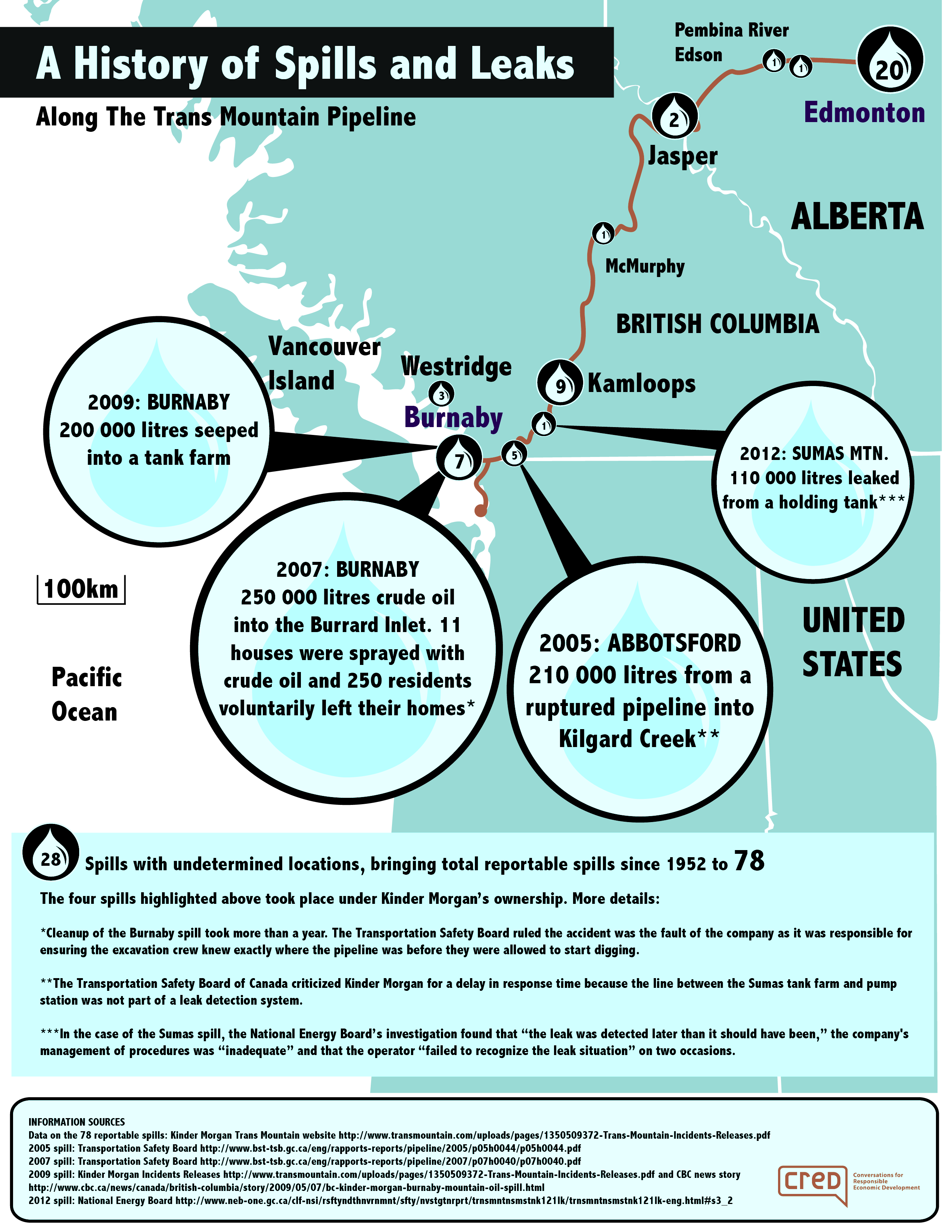 Who decides if this pipeline gets built?

When a proposed pipeline like Kinder Morgan or Enbridge crosses a provincial boundaries, it requires a review from the National Energy Board (NEB.) Kinder Morgan's proposal is currently going through such a review which will result in the NEB making a recommendation to the federal cabinet, who will make the final decision about whether the permits needed to build the pipeline will be issued.

The NEB is widely considered to be what is known as a “captured regulator;” it serves the industry that it is supposed to regulate, rather than the public interest it was designed to protect. Members of the board are almost exclusively former oil and gas executives and the recent overhaul of their power was taken word for word from recommendations from industry lobbyists.

Those changes have led to a process that is designed to make it hard for the general public to get involved in or even follow. Accessing information in the review of Kinder Morgan has been difficult even for local governments, and Kinder Morgan has refused to answer questions from cities participating in the process. That is why seven Lower Mainland Mayors have recently said that they have lost confidence in the NEB.

Fortunately the final decision will not be made by the NEB, it will be made by the cabinet of our new federal government who will be elected in this fall's election. That means that who we elect is incredibly important to the future of this proposal.

It also means we can do something about the outcome of this campaign. You can start by signing the pledge to use your vote to defend our coast.

Your vote can make a difference. That is why we are asking you to pledge to support the most competitive candidate in your riding who is likely to: