Legal challenges to the Kinder Morgan pipeline are well underway, and so is construction on the project.  The campaign has seen a lot of activity lately, both in the courts and in the streets, and we thought we'd break down some of the major activities to help you get a better sense of where we're at. 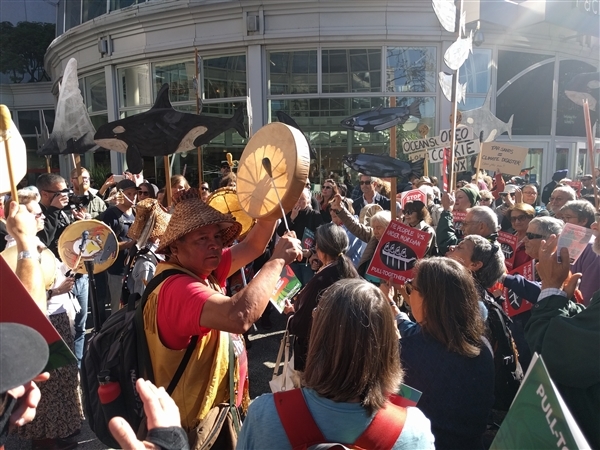 FEDERAL: In early October, fifteen First Nations, two municipalities, a handful of environmental groups and the Province of British Columbia went to the Federal Court of Appeal to challenge the cabinet's approval of Transmountain last year.  WCEL's Eugene Kung has written a creative and easy-to-digest blog that does a fantastic job of summarizing many of the key arguments presented.  And now, the waiting game begins.  While there is no official timeline for the courts to announce their decision, a window of two to six months is anticipated.

PROVINCIAL: The Squamish Nation will be challenging the provincial government in court next month, arguing that they were not properly consulted before BC approved the environmental assessment certificate for the project.  Many people in the environmental movement see the Squamish case as one of the strongest avenues for stopping the Kinder Morgan pipeline, despite the fact that the new BC government has announced that they would continue to defend the provincial approval of the Kinder Morgan pipeline in court.

Force of Nature teams in Burnaby and Port Moody met with their MLAs last week to ask them why, if they are truly committed to stopping this project and to reconciliation, the BC government will not be withdrawing from the Squamish lawsuit.  We were reassured that this court case does not seem to signal a change in policy for our government, but we remain concerned and know that our supporters and volunteers will not be satisfied unless this government truly does everything possible to stop the pipeline.

The City of Vancouver will also be in the Supreme Court of BC for the next three days pursuing a judicial review of the provincial environmental assessment certificate for Kinder Morgan's pipeline expansion.

Construction activities are underway at Westridge marine terminal and various locations around the province.  Although the company is currently able to move ahead with expansion-related activities on their existing property, Kinder Morgan is not permitted to begin construction on the new pipeline until they have met all of the conditions required by the National Energy Board.

As many of you know, the company has already been caught violating the NEB conditions on construction by laying anti-spawning mats in a number of streams around the province.  The NEB has warned Kinder Morgan about this and as far as we know the activity has stopped.  Kinder Morgan has implied that their inability to complete this task could result in construction delays of up to a year.

Meanwhile, a number of actions have already been coordinated to protest the project's construction.  Last week, the BC SeaWolves co-ordinated a kayaktavist action in the Burrard Inlet outside Westridge Marine Terminal, and earlier this morning, activists from BROKE and Vancouver 350 staged a die-in to raise awareness about the hazards associated with the Burnaby Tank Farm.

This Saturday, October 28th, a huge #stopkmflotilla will be launching from Cates / Whey-ah-Wichen park in North Vancouver.  You can sign up here to take part.

HOW TO STAY PLUGGED IN:

You can keep watching this space for updates on the campaign, keep abreast of direct action world by signing the Coast Protectors pledge, and support some of the Nations fighting Kinder Morgan in court by donating to Pull Together.

Together, we'll make sure this pipeline will not be built.