PERMITS AND PERMISSION: A Community Conversation around Kinder Morgan and the NEB

The Liberals vowed to restore the damaged National Energy Board assessment process, claiming that "while governments grant permits for resource development, only communities can grant permission."  But what of the thousands of people from our own communities who have already been denied the right to participate in the hearings for Trans Mountain?

Despite their pre-election promises to stop Kinder Morgan until the proposal could receive a fair and open assessment, Natural Resource Minister Jim Carr has now stated that his party has no immediate plans to cancel the existing review, meaning that Harper’s pipeline plan could play out under the watch of our new governance, and the Kinder Morgan pipeline could be rubber stamped by early 2016.

But we have a choice.  Join us at the Confederation Centre in Burnaby this December 9th and find out how the communities directly affected by the Trans Mountain proposal can take back our voices heard and keep Kinder Morgan out for good. 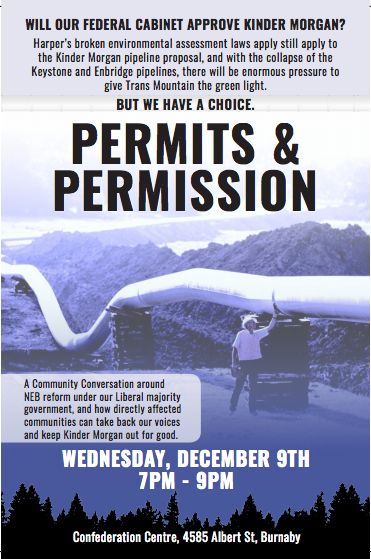