How much damage will the Kinder Morgan pipeline cause to our climate?  Well, the "upstream" climate impact of producing and transporting the bitumen to our coast is 8.8 mega tonnes per year, or about the equivalent of 2.2 million cars, and that's what the government is taking into account when they assess this pipeline for its climate impact.  Here is a report prepared for the City of Vancouver's NEB submission that backs those numbers up.

But "upstream" impacts represent a small percentage of the true climate impact of this pipeline.  Once you factor in the ‘downstream’ emissions that will be produced when the bitumen is consumed, the total carbon impact of Kinder Morgan is a whopping 79.9 megatonnes per year.

To put that in perspective, the entire greenhouse gas emissions for the Province of British Columbia in 2013 was only 64.0 megatonnes.  In other words, even if we managed to transition 100% off fossil fuels, this would be completely cancelled out by the emissions facilitated but the expansion of the new pipeline.

Here's another graphic from the City of Vancouver that help put this in perspective. 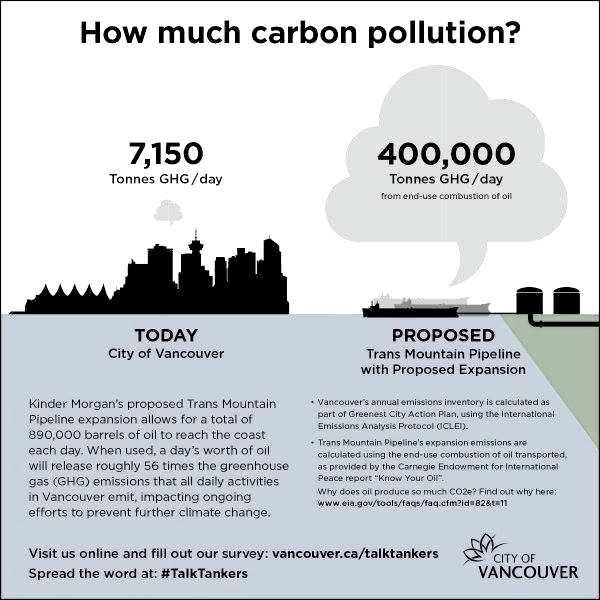 What this all comes down to is that there is no such thing as being a climate leader and building pipelines and expanding tar sands at the same time; stopping fossil fuel expansion and implementing climate solutions are two sides of the same coin.

When it comes to jobs, energy, the economy, and the climate, we think the Lower Mainland can do better than Kinder Morgan, and we're ready to flip.