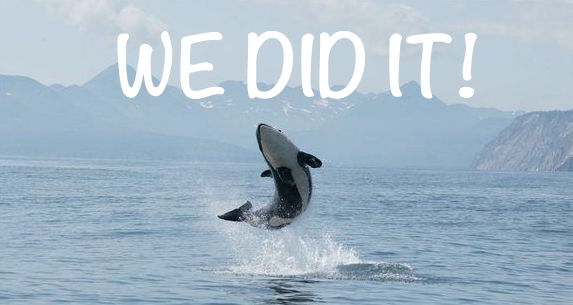 Last autumn, I attended a gathering where a handful of community organizers were chatting about the then-far-away provincial election.  The discussion was an open-ended one and was characterized by more questions than answers - but a couple of ideas emerged which really hit a chord with me and feel very relevant today given the events of this week.

The first idea emerged as we mused over the question, "what does winning look like?"  Until that day, I'd really only considered two potential scenarios - an NDP or a Liberal majority government - neither of which seemed very much like 'winning' to me.  But with whispers of the potential for two more seats to be won by the Green Party on Vancouver Island, we began to speculate on the possibilities of a Liberal or NDP minority government with Greens holding the balance of power.  A rush of excitement and a sense of possibility hit me in that moment, as it does whenever I perceive a previously unforeseen opportunity unfolding in my midst.  As much of a long shot as these scenarios were, they imbued me with a renewed sense of excitement and opportunity which I carried away with me as I embarked upon this year's campaign.

The second idea I took away from that discussion arose in response to another question.  "Since we can't control the outcome of the election," some one pondered, "how can we make sure we win, even if we lose?"  For me that meant making sure sure we took full advantage the opportunities afforded by this election to elect great local candidates who would stand strong against the pipeline regardless of who formed government.  That's how Force of Nature's "Vote Kinder Morgan Out of Our Communities Campaign" was born.

I'm pleased to say that after four months of non-stop organizing, nearly a thousand hours of door knocking, and over twenty thousand phone calls to constituents, all four of our "Vote-KM-Out" candidates have now been elected into the BC Legislature!  In addition to this victory, we've had thousands of courageous, respectful, bridge-buiding conversations with our neighbours from across the entire political spectrum, built an incredible community of volunteers and organizers across Vancouver, Burnaby and the Tri-Cities, and had an absolute blast doing it!  To me, regardless of the final election results, this truly is what winning looks like.

Of course, like you, we're all holding our breath for May 24th, by which date the final results of this election will have officially been announced.  But we mustn't make the mistake of conflating patience with complacency - because if we do, we run a real risk of loosing out on this opportunity (even if we win.)

A minority Liberal government represents an incredible opportunity for all of us fighting for social and environmental justice in this province.  But its an opportunity that won't take advantage of itself, and we cannot afford to sit back and leave it up to our politicians to sort their power struggles out on their own.  This moment of power to stop Kinder Morgan, send Site C to the BC Utilities Commission, ban big money in politics and bring in proportional representation will only come to fruition if we raise our collective voices to demand cooperation from our newly elected officials, and hold their feet to the fire when it comes to honouring the promises they made to us in their platforms.

So we'll be in touch over the coming week to keep you posted and let you know about upcoming opportunities to plug in and take action.  And until then, big hugs and huge thank yous to everyone of you who helped get us to where we are today.