Oil Spills that can't be cleaned up 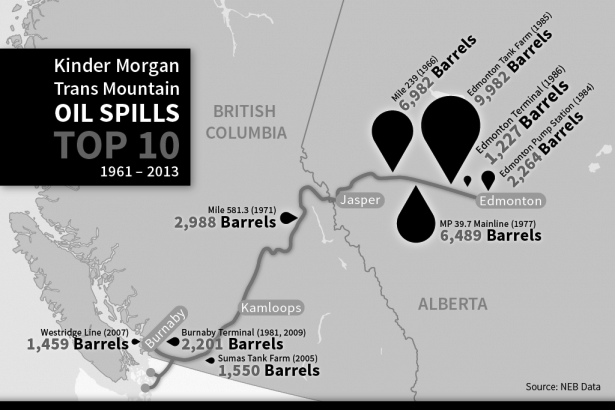 Kinder Morgan has had a history of leaks and spills throughout its history, including the 2007 spill along the Barnet Highway that affected many residents of North Burnaby.  The new pipeline is moving a new kind of oil, a form of tar sands crude known as dilbit or diluted bitumen.  This mixture of unrefined tar sands crude and condensate creates many new challenges in the case of an oil spill or accident.

Condensate is incredibly toxic cocktail of chemicals that contains benzine and other volatile hydrocarbons. These evaporate quickly, releasing a toxic cloud that could threaten the health of local residents, and delay emergency response during an oil spill. Community Group North Shore Nopes have produced this report on the human health impacts of dilbit spills as part of their submission to the NEB.

Once the diluent has evaporated, the remaining tar sands crude may sink in marine environments. This poses a huge challenge to oil spill clean up because we don't have any technology to clean up oil once it has sunk below the surface. Transport Canada reports say that little as 5% of this oil could be cleaned up by an emergency spill response.  If you would like to learn more about this topic, the National Academy of Science has produced a study entitled "Spills of Diluted Bitumen from Pipelines," available here.

And check out the oil spill modelling below to see how a spill might impact the Burrard Inlet coast line.